New Trends in The Representation of Women in Contemporary Media Culture: A Critical Analysis of Three Women Empowering Advertising Campaigns

Unlike previous scholarly research which has examined women representation in the media by highlighting the point that women have long been depicted as passive and dependent on men thereby reproducing traditional gender roles, this research aimed to discover the newly emerging trends in the women’s media representation, in which over the last decade women have been represented in empowered and liberalized manner. Through social semiotic and critical discourse analysis of ALWAYS: Like a Girl (2014), CoverGirl: Girls Can (2014) and Gillette Venus: Use Your And (2015) advertising campaigns’ representational practices about women in the example of campaigns’ video commercials, this research concluded that while these campaigns’ visual texts construct the meaning of empowered women as independent and powerful by way of producing the myths of contemporary women as physically active, multidimensional, authoritative, darer, courageous, funny, successoriented and unstoppable, these representations strive to promote women’s empowerment rhetoric to reach advanced consumerism targets of commercial companies through encouraging women to consume recommended brands as a sign of their independence and feminine power. 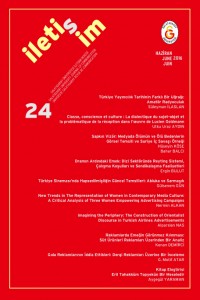