This article presents two arguments about women’s rights in Turkey and the lack of their implementation, as developed in the Türk Kadını magazine, published between 1966 and 1974. Our study is qualitative rather than quantitative, aiming at pointing to the existence of a certain discourse rather than to prove its impact. The results of our study contribute to the wider field of Turkish women’s studies, by showing the presence of certain arguments concerning women’s rights that has not been previously studied; moreover, our study points to the value of historical media studies to the wider field of empirical women’s studies. The two arguments are the incomplete emancipation of Anatolian women argument (IEAWA) and the emancipated but unliberated Turkish women argument (EUTWA), respectively. While the two arguments point to different explanations for the lack of implementation of Turkish women’s rights, both focus on the context and conditions of Anatolian women. 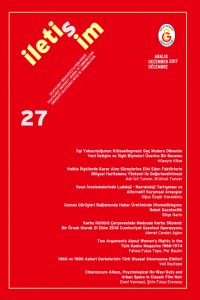