To Be a Relative to “the Other”: “Foreign Son-in-law”

The fact "the other" as a concept fills up various identities in a wide range and, furthermore, provides those various identities in a wide range with the opportunities of being able to be together. In the context of the fact "the other", when placing "us" and "the others" who are not from "us", the important role which is committed by mass media (television and especially television series format) cannot be denied in creating the images of "us" and "the others". With the pre-recognition of the fact "the other" in the TV series called "Foreign Sonin-law" with higher ratings in Turkish television will conceptually and theoretically be discussed over the presentations of "us" and "the others". In the so-called series with a plot of a marriage that created "mandatory" relations between the members of two families one of which is from a city (Gaziantep) where the traditional and religious values are relatively considered important and the other is from Greece, a country which is considered the opposite of what is nationally and religiously believed as right by the part; both nations become mirrors for each other by the help of these families, and conflicts, arguments and differences between the nations are presented by the events series within individual relations level. In the example of the mentioned television series, the existence of "the other" as international actors in Turkish television, how and who is forced to be the other is explicated; individual relations and collective perceptions as premise/sequent, and Greece placed as "the other-foreign" with its citizens in Turkish community are discussed with the attributions imputed on them indirectly by mass media creating an "other" in the presentation mechanisms and the ways of using those mechanisms in the television series are evaluated with a critical point of view and a hermeneutic method. 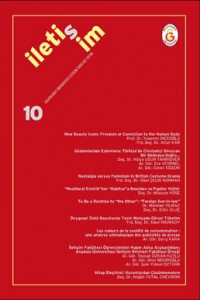