New communication technologies that have started to be pronounced in media studies after the 1980's were addressed in most of the theories that have been developed to analyse economic and social change after these years. While the most liberal plurist scholars agree that global information and communication technologies can the effects change on a global scale, they differ sharply over the nature of these changes. In this study, the writer wants to address the transnational discourse surrounding the internet. although liberal pluralist literature, which the witnessing liberal scholars, public fora, government documents and of course industry advertisements, is nothing less than a political myth based on an ideology of information technology and of course technological determinism is discussed. Throughout the study; discussion is structured in the economy politics of communication and demonstrates the paradigm shift in content regulation and observes that the existing national regulation laws that serve as the regulatory framework to control content are coming under increasing scrutiny. Although neo liberal hegemony's dominant discourse, this study proposes a pluralism and a new policy making in the media policy making practice which is called "public - policy making", and revisited public policy practices. At the end of this study; this article will present a new model of Turkey's communication policies. 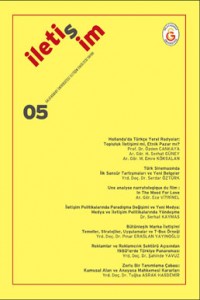