Product Placement and Growing Concerns as to Editorial Content: The Case of Television Drama Sector in Turkey

Product Placement and Growing Concerns as to Editorial Content: The Case of Television Drama Sector in TurkeyThe study provides an assessment of the growing tension between product placement, an advertising application whose importance has been increasing for commercial TV, and noncommercial, cultural dimension of broadcasting. Broadly, ‘product placement’ is a technique of advertising which is based on references to or inclusions of a product or a brand within a program flow. In this sense, it is an advertising technique which is very hard to distinguish from surreptitious advertising and until very recently it has, therefore, stayed as a ‘taboo’ in many countries due to the reason that it would breach the principle of ‘separation between advertisement and editorial content’. Yet, this stance has lost its ground very rapidly in the recent years and new regulations to ‘legitimize’ product placement have been adopted by many governments. In parallel with the amendments in European Union’s (EU) legislation, a new code in Turkey (Code 6112) was adopted in 2011 to lift the ban on product placement applications. Following this amendment, product placement has become a way of advertising employed at an increasing scale and a growing source of revenue for Turkey’s media industry. In the scope of study, the amendment process behind the legitimation of product placement is assessed from a critical point of view. Then, a series of interviews with professionals from Turkey’s media industry, especially from the TV drama series sector are conducted to understand concrete developments fueling concerns as to the editorial content. This paper argues that product placement practices have brought about the emergence of a market environment, in which the principle of ‘separation between advertisement and editorial content’ is damaged more than ever.

The Journal of Social Science 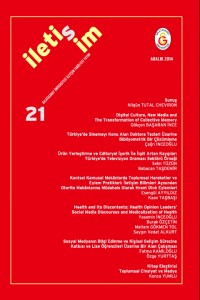