The Analysis of Advertisements Give Place to Children in Terms of Messages Given to Children and Adults, Roles and SexBased Discrimination Components

Nowadays, media is used for many different purposes beyond entertainment, such as information, marketing, sales-perception management. The advertisements are short term but very effective tools of media and children frequently appear in advertisements as message carrier or targets of message. This research aimed to examine the roles of children and adults who related to children; the messages given to children and adults by means of children and sex-based discrimination components that are taken part in advertisements. Within this context, TV programs that have the highest ratings in the prime time period - 20.00-22.59 - were determined. In 21-27 December 2015 dates, the advertisements that take place between these programs and hold child component were determined, analyzed and interpreted with qualitative research design. In the research, it has been determined that children  are mostly shown as family members, their families are directed to buy with an emphasis on parenting feelings and children are encouraged to negative behaviors in the advertisements. It has also been observed that there are frequent sexual discrimination components in advertisements 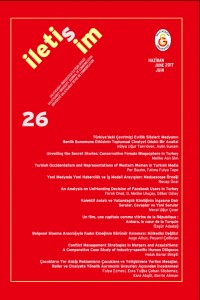