Add To My Library

Information and communication technologies gained importance after the economical restructralisation in the 1980s. Thanks to the technological advancements, the Internet gathered pace and scope enabling the multidirectional communications. While paving the way to the newer opportunities in commercial sense, it also caused a change in the business models. Internet is progressively becoming the dominant medium. Regarding the aspects like simultaneous presentation of text, graphic, image, sound and distinctive interactive nature, internet is distinguished among the other media causing a common belief that internet shapes the future of the press companies. Whether the Internet will eliminate the existing traditional media or not, or what the probable effects might be is a contemporary issue, as it was before, in the very first appearance of the previous media types. Although these debates lack concrete results, it is a widely accepted fact that the Internet affects the working principles and business models of the traditional media, and will continually do so.For the reasons mentioned above,newspapers reserved a place on Internet for it has been popular. The newspapers which transmitted only the print content to virtual space before, turned more to the utilization of the possibilities provided in time, enhancing diverse business models for sectorspecific growth and much profit. In this article, the business models introduced by the newspapers on the Internet are analyzed, the orientations of these models by the companies mentioned according to the trends to higher efficiency and greater revenue are inquired. In the extent of the research, primarily, the constituting conditions of the Internet economy and the business models arising in this area are undertaken, and the exercise of these models in both the global and the Turkish press are investigated within a detailed literature study. Indeed, it has a major value that the examination of the modes and means of the existing business models and their inclinations for the newspaper corporations whose concern is to hold their position in the era of the Internet that is newer technological facilities and targeting a larger and an even younger crowd each passing day. 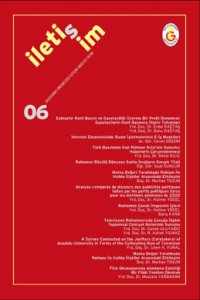